Rock Where Blood Run Out 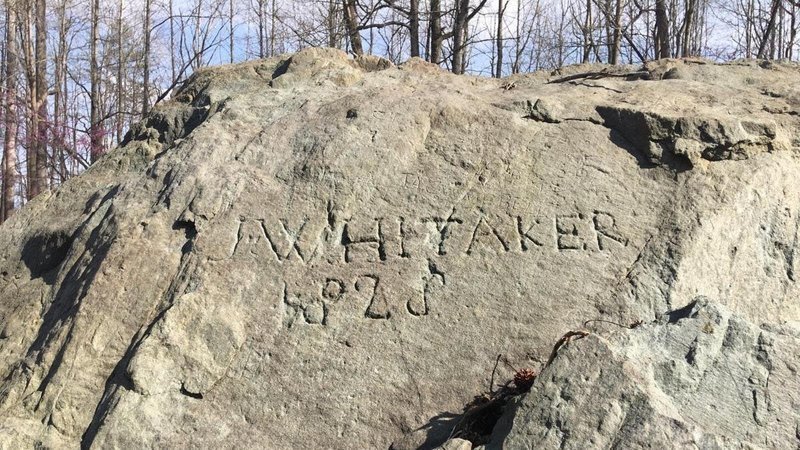 The now-underway construction of Tupelo Junction, a new housing development featuring 181 single-family homes on the corner of Stagecoach and Lebanon Roads, will result in destruction of the ‘Stagecoach Rock,’ City Manager Chris Rollins told the Mebane Enterprise on Thursday. The rock, which has stood alongside the road since its construction as King’s Highway in the 18th century, is the subject of local legend, though disputed by some historical investigations.

“History or legend? Carvings on Stagecoach Rock date back to 1800s, could indicate a gravesite”

According to local lore, driver Whitaker tragically died when his stagecoach, which was rolling downhill towards Hillsborough, hit a bump in the road and spooked the horses. He was thrown against the rock and killed – then buried there. Locals engraved his name and date of death on the stone.

“I haven't been able to confirm that he was killed there or that ever happened, as far as newspaper stories or other documents from the past, so there's nothing to confirm it,” Mr. Patterson, author of the popular petition ‘Save Our History! Stagecoach Rock’ said. “Of course, there's nothing confirmed that it didn't happen either. You can’t prove either way or the other, I just can't find any record.”

In the story, Patterson went on to say that one can see a “headless horseman” near the rock on stormy nights.

City manager Chris Rollins disabused the widely-held belief that the rock has historic significance. According to the “legend” about the rock, Rollins relayed the long-held belief that a stagecoach driver fell off his carriage, striking his head on the rock, and was believed to be buried underneath the rock that had caused the fatal wound.

However, according to research that Rollins relayed to the board, the “rock” is even more than just the large boulder that protrudes from the ground at the corner of the ostensible path of the former stagecoach route. Instead, the “rock” is actually the top of a large rock formation – “the tip of a mountain sticking out of the ground,” Rollins said, much like the tip of the proverbial iceberg. No one could possibly have been buried underneath it, he reported, because there is no “underneath” to be located.

In the past 200 years, other prominent locals have engraved their own names on the stone. The name B. H. Mebane is carved into a corner of the stone, along with the date 1906.

A man named Gary Clark has been researching the mysterious rock of myth. He believes it's possible B. H. Mebane is related to Alexander Mebane, for whom the town is named. He also found an inscription that appears to be from even earlier: Pratt Witt, 1817.

Clark has reason to believe even more names are hidden underground. "There are so many names etched on it," said Clark. "Some are even close to the base of the rock, and I don't think someone laid on their stomach to carve into it."

The state Department of Transportation had also concluded that there is no “historical significance” since there is no evidence that has been found to substantiate the legend.

According to a contractor working on behalf of Garman Homes, the developer of the Tupelo Junction project, the re-survey of the site conducted after local outrage over the rock’s imminent removal resulted in results which the thermal imaging contractor called ‘highly unusual.’

“There appears to be a large void or hollow under this formation which is not indicated on the original plans for the development,” says the team’s lead technician. “Either it’s something they didn’t have the equipment to pick up, or the initial surveyors omitted it from the site map thinking it was an imaging error.”

At time of writing, Garman had pledged to audit the results and possibly conduct another survey if necessary.

Construction of Tupelo Junction, the 181-unit housing development at the corner of Lebanon and Stagecoach roads in North Mebane, is nearly 6 months behind schedule as a second grading contractor leaves their contract unfinished. The regional manager for Garman Homes called the situation “extremely disappointing” and stressed that the company would be finding a replacement for the grading and clearing operation as soon as possible.

Wayne Rice, the foreman of the latest grading crew to walk off the job gave a statement to the Enterprise which could not be printed in full, but expressed his desire to “never go near that g----n rock again.” When asked whether his hesitancy was related to the public pressure campaign, Rice gave no comment.

Ron Garman, Raleigh CEO and Philanthropist, died Sunday while operating an off-road vehicle at his Jordan Lake property, say the Wake County Sheriff's department. According to responding deputies, “Mr. Garman was operating an all-terrain vehicle at a high rate of speed when rough road conditions caused him to lose control of the vehicle, impacting a tree and boulder.” Mr. Garman was pronounced dead at the scene. He is survived by his wife and three children. In a statement to the Sun, Mr. Garman’s wife expressed a desire to temporarily close their business, Garman Homes, to “focus on family.”

At some point between 11 p.m. on October 31st and 3 a.m. on November the 1st, unidentified vandals gained access to the morgue unit beneath the WakeMed Trauma Center in Raleigh, desecrating at least one set of remains being stored there. Neither Raleigh PD nor WakeMed gave detailed comments on the crime, but an anonymous morgue tech told N&O reporters that a body had been “nearly completely beheaded.” “I just don’t understand who would commit such a hateful act,” she continued- “just an inhuman thing to do.”

The owner of El Ranchito, a small grocery in Southeast Raleigh, describes a “dedicated” group of trick-or-treaters riding horses through his neighborhood near midnight. “I don’t know where they came from or even how they got that horse downtown, but I tell you it really made me laugh.” No neighbors or trick-or-treaters could definitively corroborate the story, though one six-year-old boy described sounds he heard from a neighboring street as “Hooves. Definitely hooves.”

Stagecoach Rock will not be destroyed

The developer of Tupelo Junction confirmed to the Mebane Enterprise on Wednesday that Stagecoach Rock will not be destroyed to make way for the development. "The public outcry was that it was going to be destroyed, and no one had ever said that we were going to destroy it," Mrs. Garman said. "We never said we were going to destroy it. The plans that Mebane has approved don’t interfere with that rock. So, it will stay intact."

Mayor Ed Hooks also confirmed to the Mebane Enterprise that the rock will not be destroyed.

The rock has now been roped off with yellow caution tape, Rollins said, to alert workers to steer clear of the rock. Garman Homes shared the plans for how they'll work around the large rock with the Mebane Enterprise. "We're going bury one side of it, which is the side that faces the road, which is not the side that has the writing on," site manager Parker Jr. said. "That's about all that's going to happen. You'll still see the rock. Our goal is to keep the names visible."

the first three articles and the last one are real, though some names, dates, and publications were changed. the middle section is fictional please don't sue me developers